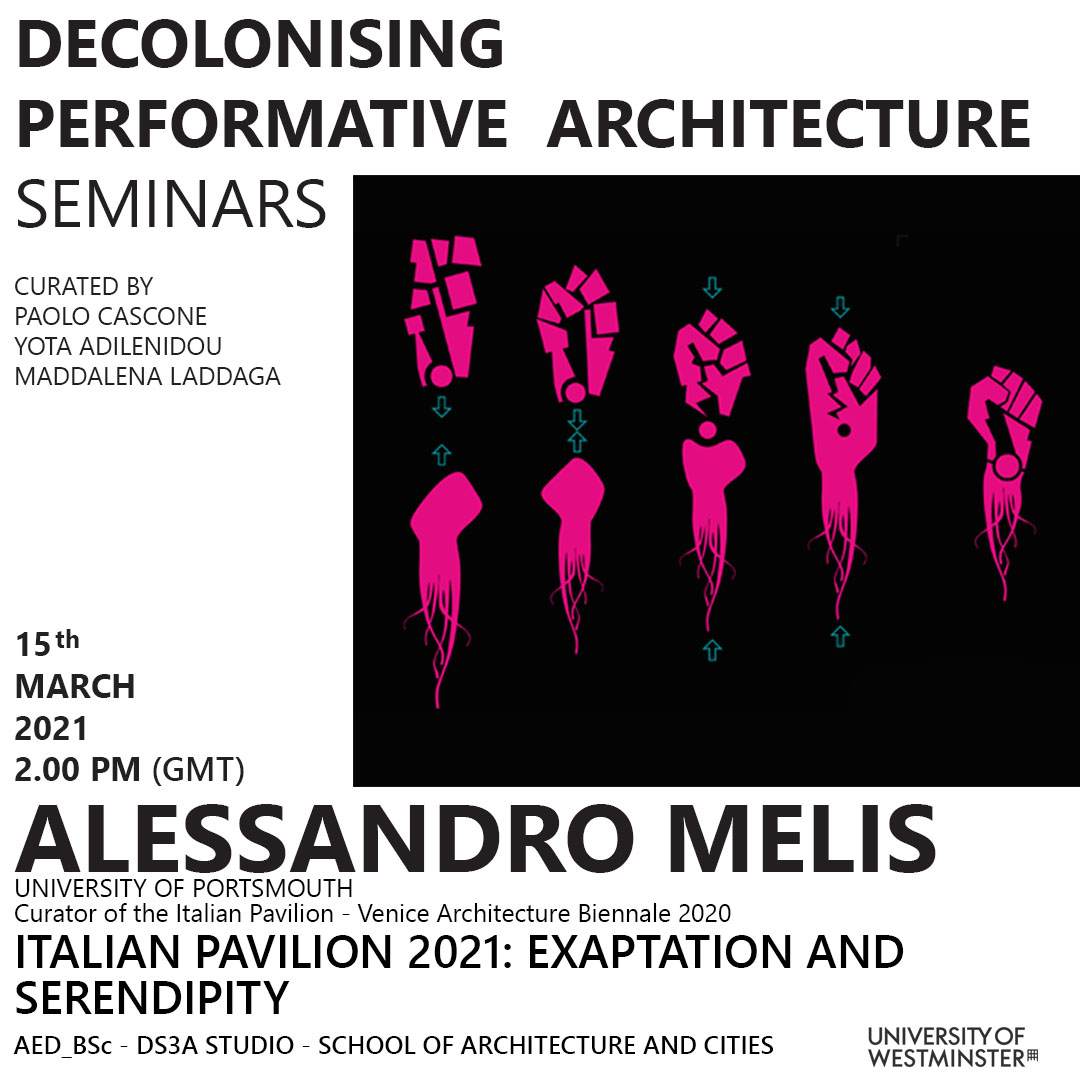 The seminar is organised by Paolo Cascone, Yota Adilenidou and Maddalena Laddaga in the frame of Architecture and Environmental Design DS3A “Decolonising Performative Architecture” seminar series.

Dr. Alessandro Melis RIBA ARB AOU, is a full professor of architecture innovation at the University of Portsmouth and the Director of the Cluster for Sustainable Cities in the UK. In 2019, he was appointed by the Italian Minister of Cultural Heritage (MIBAC) as the curator of the Italian Pavilion at the 17th International Biennale of Architecture in Venice 2021, and in 2020 Ambassador of Italian Design on behalf of the Italian Minister of Foreign Affairs. Previously, at the University of Auckland, he was the head of the technology area and director of postgraduate engagement at the School of Architecture and Planning. In the period 2010-2013 he has been the Director of Urban City Lab at the Institute of Architecture of the university of Applied Arts Vienna (Die Angewandte, Vienna) and visiting professor at the Foster Foundation, and in Germany (Anhalt University, Dessau). He holds a PhD in architecture design from the University of Florence. He has been an honorary fellow at the Edinburgh School of Architecture. He has also been invited as a to speak at the China Academy of Art, the University of Cambridge, the MoMA New York, TED, the Italian Institute of Culture in London, and the UNESCO Headquarters in Paris. He is a visiting critic at UCL Bartlett, Architectural Association London, SCI-Arc Los Angeles, RMIT Melbourne, TU Berlin, Florida International University, and New York Institute of Technology. In 1996, he founded Heliopolis 21, a multi-awarded architecture practice based in Italy, Germany, and the UK. The SR1939 Institute of the University of Pisa, the Stella Maris Hospital, and the Auditorium of Sant’Anna, inaugurated by the president of the Italian Republic, Sergio Mattarella, are acknowledged both in scholar publications and in popular magazines as examples of excellence in sustainable design. The recognition of Alessandro’s research is corroborated by a record of over 150 scientific publications and by as many citations, including in popular periodicals such as Wired, the New York Times, the Independent, Reuters, and the Conversation. His work was the object of several exhibitions and of a recent monograph (Rome, 2020) edited by Giuseppe Fallacara Chirico, titled “Alessandro Melis, Utopic Real World.”