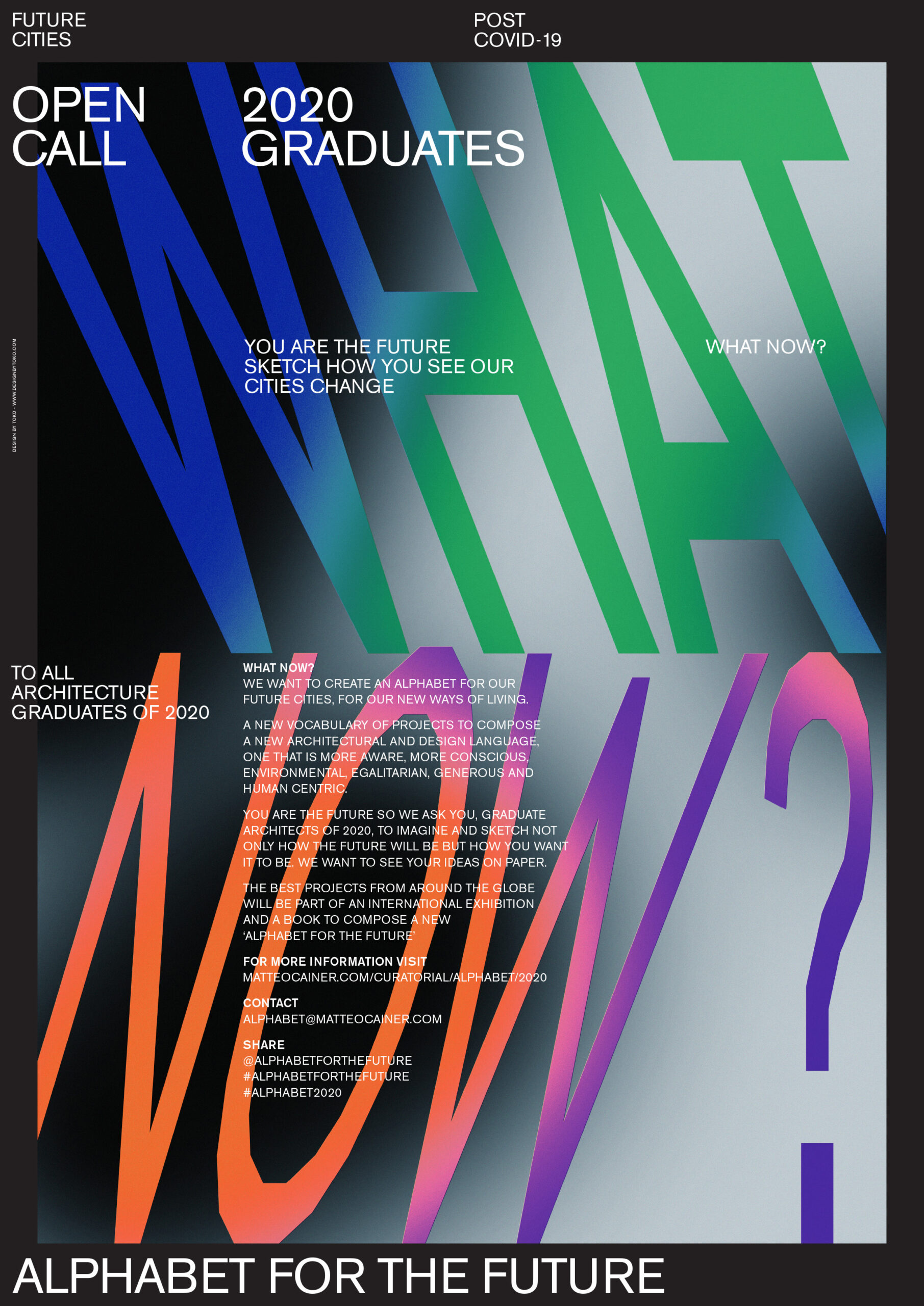 Alphabet for the Future

Matteo Cainer is launching a new curatorial initiative, an international OPEN CALL to all Architecture Graduates of 2020, to imagine and sketch a new extraordinary world capable of transforming the pandemic crisis into an opportunity to foster new lines of thinking, innovation and research. Envisioning radical strategies and alternative behavioural models for the future of our cities will provide an opportunity to question our current mode of living and create a new resilient global narrative.

The graduating class of 2020 has been asked to change their long-standing routines of education, to work and learn remotely, and to graduate in their rooms. Yet they rose to the challenge! We admire their strength, their will, their passion and perseverance in such extraordinary times. We believe, therefore, that it is time to give back to them, because the future IS an opportunity and we want them to be able to seize it and to make their voices heard on the world stage.

It is for this reason that Matteo Cainer is launching this ‘Call to action’ specifically to the 2020 Graduates. This is their opportunity and their moment to put forward their ideas and their visions. He is asking them to imagine and sketch not only how the future will change, after the pandemic, but how they WANT IT TO CHANGE.

One thing is clear: in these times of uncertainty, we need to anticipate, evolve and transform our urban and collective spaces, internal environments and objects of use, by not only decorticating old models and welcoming hybrid negotiations with new realities, but generating new paradigms of living that integrate nature and social thinking into our designs. Enhancing the humanity of projects and fostering a comprehensive sensibility and active social empathy will help us create the necessary foundations to build alternative and more generous human-centric solutions.

The aim is to move beyond the current scene, dominated by cyberspace, video simulation and the fashionable image parade and instead promote the ‘sketch’ and its power to clearly convey innovative ideas and revolutionary concepts. In this pause of accelerated online immersive environments we want to illustrate how the power of a simple idea can be a catalyst for future change. Graduates have free rein to choose their focus of interest in how they think the pandemic will inform and should inform our imminent new way of living.

The best works from around the globe will be part of a curated international exhibition that aims to create a new Alphabet for the Future: a fresh architectural and design language to compose an unprecedented  vocabulary of ideas for a more equitable way of living, one that is more aware, responsible, conscious, environmental, egalitarian, generous and human centric.

All Architecture Graduates of 2020 are invited to go to:

Matteo Cainer is a practising architect, curator and educator. Based in London, he is Principal of Matteo Cainer Architecture, founder of the Confluence Institute for Innovation and Creative Strategies in Architecture in Lyon, France and Director of Architecture Whispers.

After receiving his master’s degree from the University of Architecture in Venice, Italy, he worked and collaborated with a number of celebrated international practices including Peter Eisenman in New York City, Coop Himmelb(l)au in Vienna, and Arata Isozaki Associati in Milan.

It was in London that he created/directed the Design Research Studio at Fletcher Priest Architects, and in June 2010 opened his own office.

Curatorially in 2004 he was Assistant Director to Kurt W. Forster for the 9th International Architecture Exhibition of la Biennale di Venezia – METAMORPH, and in 2006 was appointed curator of the London Architecture Biennale – CHANGE, with the exhibition: ‘The World in One City – A Sketch for London’. In 2011 he moved to Paris where he conceived and directed ‘Architecture Whispers’ a series of intimate multidisciplinary and cross-cultural conversations between emerging and consolidated visionary international architects and their colleagues in other disciplines. In 2018 he moved back to London where he currently works and practises and in April of the same year he was nominated curator of the 7th Edition of the Dark Side Club, a three evening forum for critical debate with prominent industry experts happening during the vernissage days of the 16th Venice Architecture Biennale.

Matteo has always been active in academia: from visiting critic at the Bartlett School of Architecture, the AA and Westminster in London, to the Dessau Institute of Architecture in Germany and Cooper Union, Pratt and Penn in the United States. In 2009 he started teaching at the École Spéciale d’Architecture in Paris as an Associate professor and in 2010 he conceived, created and directed the Pavillon Spéciale, an annual architectural series that gave international young emerging and experimental architects the opportunity to build with students a temporary pavilion in the heart of Paris, France. In 2013 he co-founded and co-directed with Odile Decq the Confluence Institute for Innovation and Creative Strategies in Architecture in Lyon, France and was Chair and professor until July 2015. He continues to be a regular guest critic and jury member in various universities worldwide.

The work of Matteo Cainer and his practice has won various awards and has been published in numerous books and international magazines; furthermore the work has been exhibited in various international exhibitions, and Matteo has also written and edited a number of books and articles in the field of architecture and design.