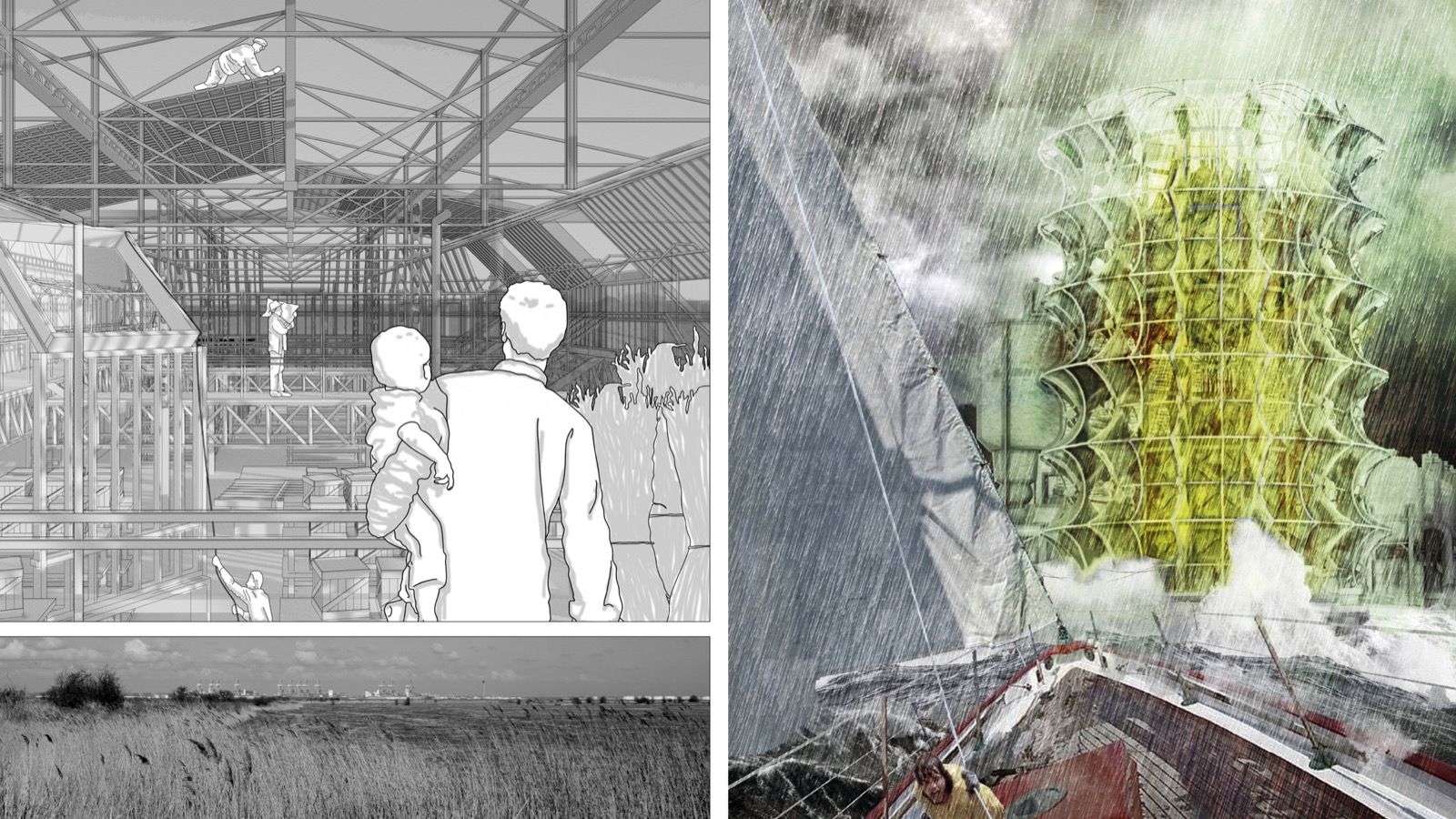 “The AJ Student Prize celebrates the brilliant emerging talent of students graduating from undergraduate and postgraduate architecture courses across the UK.”

Cliffe Village, located on the periphery of London is a historically working town with a proportion of the Marsh located north of the site used for munitions production. This project is a community centre located on the periphery between Cliffe village and Cliffe marsh, offering a new approach to how we develop villages non-specific to London. This will be a critique on the proposed intentions for the new Cliffe residential, the project provides the means and opportunity for the residents to dictate the village they want to see.

The project is dictated and influenced by the history of Cliffe as well as its vernacular. I aim to provide the community the means and education for work relating to the construction of the new Cliffe, celebrating the mixture between community, circularity and craft:

This project invites us to pause and question the sensitivity needed when developing areas found on the periphery of London.

‘There was the red sun, on the low level of the shore, in a purple haze, fast deepening into black; and there was the solitary flat marsh; and far away there were the rising grounds, between which and us there seemed to be no life, save here and there in the foreground a melancholy gull.’

Reece’s project to develop a local Kentish village can be read as a graphic novel. Viewed as a continuous scroll rather than as individual images, his delicate models and drawings capture the ‘dark flat wilderness’ of the Hoo peninsula, at the very edge of the Thames Estuary described in Charles Dickens’ Great Expectations.

His proposal is to work with the heritage of Cliffe Village, imagining incremental ways of expanding the community within this unique landscape. This reflects his deep concern for what has been there before, to learn from the local vernacular and to interpret these findings into a contemporary context. Growing the village over time allows Cliffe to re-frame specific fragments of the landscape, atmosphere and culture of this distinct setting.

There is something quiet, caring and personal in this work – it is humble, light in touch and reflects a sensitivity that is rare for a young designer.

The UK Government has marked the edges of the Thames Estuary as ground for regeneration and further urbanisation. Connecting the point of Westferry in East London to the Isle of Sheppey and the pier of Southend, this 70 kilometer stretch has also been described as the Thames Gateway. Once home to many hard and commercial industries these lands are characterised by a lack of access to public transport, services and employment, whilst at the same time, the surrounding farm and wild salt marshlands host some of the country’s most fragile ecologies. With tidal flows continuously shifting this landscape, what is this a ‘Gateway’ to? This year Studio 4 explored these peri-urban and the blurred edges of the River Thames. From Gravesend out towards the Hoo Peninsula at the very edge of the Thames Estuary, the story of the river was mapped – its heritage and the unique landscape features that make up this ‘dark flat wilderness’. We challenged traditional notions of boundaries and explored analogue and digital Landscape Urbanism Strategies to plot, adapt and reimagine these unknown fields. The Studio welcomed projects with character, risk and a wonderful sense of speculation.

The Rig : Towards a New Biome

It’s 2050. Climate Change is Happening. The Rig exists in a future where civilisation is facing the eventuality that the climate crisis has overridden our attempts to restrain a habitual resource-intensive mode of operation. With just a 10m rise in sea level, Yorkshire’s economic extensive, rich, agricultural land – is underwater. Innovative ways of how we inhabit and use its resources must undergo a paradigm shift.

There has been a loss of 4.1 acres of agricultural land and 3.2 acres of residential land from a total of 9 acres in Hornsea. Yorkshire must devise new methods of rehousing, replanting and resupplying. THE FARM (Future-Flooding Alternative Regeneration Microcosm) is an overall design scheme that proposes a cellular regeneration model to address the issues of future-flooding in the Hornsea area caused by climate change.

The concept is based on reversing the roles of land and water, challenging the dichotomous relationship to support life’s survival in the eventuality of farmlands near the coast, rivers and lakes being flooded due to consequence of unchecked climate change. Similarly, housing will be significantly impacted, resulting in the forced relocation of settlements on the current uphill farmland. This will also necessitate alternative agricultural production and cattle breeding methods.

The Rig is an exploratory and propositional response to this call. Providing a new framework for living and farming with minimal environmental impact, it grows and manufactures alternative food sources and other agricultural by-products in abundance using a pixel farming logic not only by approaching farming in a new light but also building, a no waste policy for living. The Rig in the Mere is a prototype of an architectural typology to create green jobs, build a resilient economy, achieve net zero carbon and work with nature to invest in our future.

Futuristic and visionary, imagined in a world significantly changed, yet only thirty years from now. Hornsea Mere in North Yorkshire was identified and chosen by Rebecca (with her master-planning studio-partner Lavinia Pennino) as a laboratory within which to explore and develop specific, tangible, humane and architectural responses to the devastation that the climate crisis is imminently going to have on our coastal regions. Whilst convincing as designed for Yorkshire, ‘The Rig’ can expand, be multiplied, and located anywhere on our retreating coastline, with its composition (orientation and programme) able to adjust to specific socio-economic and environmental conditions as demanded. Both site-specific and universally applicable to this real-life contemporary concern, the project and Rebecca’s approach to design are ambitious, fearless, and rigorous. Her deep concern for the future of the human condition in the world we are mercilessly depleting of its resources, is expressed here by presenting a new way of living; with the possibility of intelligent cultivation, a new symbiotic relationship with the ‘land’ as ‘water’ and a self-sustaining progressive and productive attitude to the making of the ‘buildings’ themselves, their materiality and longevity.

In the midst of a world-wide, 4th (technological) ‘revolution’, the ‘climate crisis’, what was a seemingly endemic ‘pandemic’ and the necessity to embrace new ways of living (outside the EU)… DS11, went NORTH… big challenges, fundamental questions… together we considered how a repositioning of the territories, towns, trade and turmoil in the North of England, might serve as an imaginative context for developing new understandings and visions for future human life and inhabitations. Guided by Elantha Evans and Dusan Decermic, the studio is conceived as a supportive, open-minded, self-reflexive and critical framework. By negotiating design ambitions at large geographical or urban scales and their implications as architecture and as inhabited spaces, projects carefully explore the relationships between abstracted urban / rural genetics and unearth unexpected possibilities for material rendering of space. Relevant, sensitive and emotive programmes are developed by each student in response to the contextual, socio economic and political concerns exposed through careful collaborative study and reflection by the studio.