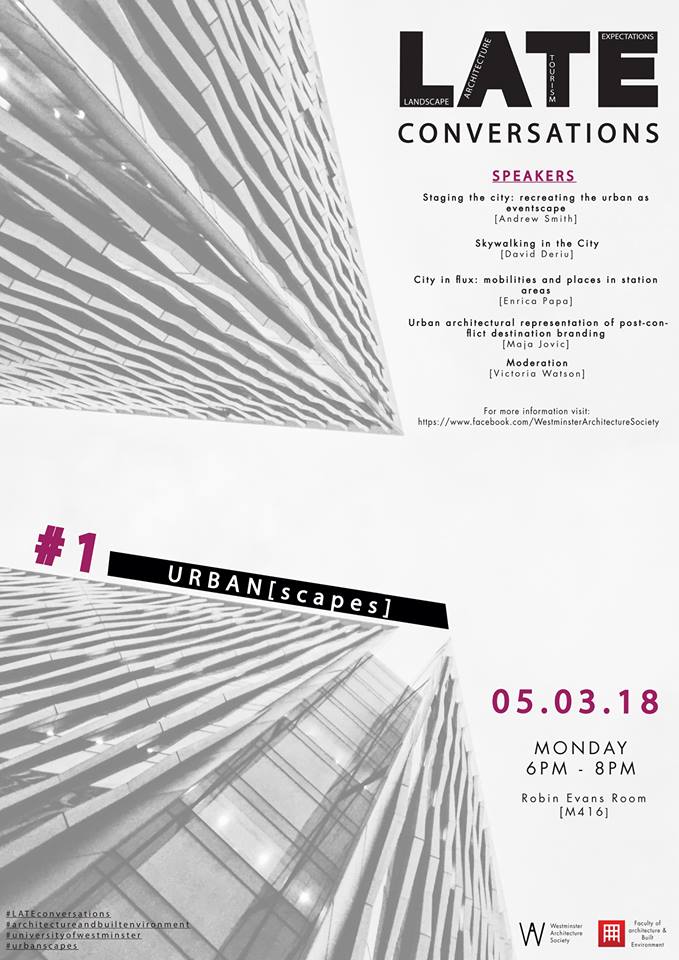 Staging the city: recreating the urban as eventscape

[Andrew Smith]
Like other theatrical metaphors, the idea of the ‘city as stage’ is commonly cited within urban and tourism studies. However, this interpretation treats events and the context in which they happen as separate entities when they are better understood as intertwined. This presentation outlines the contemporary use of public spaces for (planned) events and explores the idea of urban eventscapes – assemblages of people, buildings and event structures. It is easy to dismiss these as temporary phenomena, but there is evidence that festivals, sports events and exhibitions can have lasting effects on urban spaces, and that the built environment is being adapted to accommodate them.

Skywalking in the city

[Davide Deriu]
Ever since the advent of high-rise architecture, the modern city has been a distinct locus of vertiginous experience. Whilst the correlation between vertigo and tall buildings might at first appear to be an obvious one, it is in fact a variable function of ever-evolving techniques and materials, and depends on the psychosocial conditions that underlie the experience of space at a given place and time. The presentation explores the ambivalent concept of vertigo and its significance for contemporary architecture through concepts of transparency, experience, and kinaesthesia. Focusing on the ongoing trend for elevated glass platforms, it proposes that these design features constitute a kind of sixth façade that characterises the emergence of an ‘architecture of vertigo’.

City in flux: mobilities and places in station areas

[Enrica Papa]
Using an approach that considers station areas both as places and as nodes in the transport network, the talk addresses the role of station areas in Greater London, with the aim of supporting long-term integrated land-use and transport strategies at the regional scale. In fact, ‘Transit Oriented Development’ has also been widely advocated and applied in London; however, so far no study has systematically developed a TOD typology in the London context. This paper fills this gap. The main innovation of this application of the node-place is that it is applied in the day hours and the night hours. Using GIS, the paper analyses network connectivity (‘node values’) and geographically detailed data on amenity levels, job and employment densities (‘place values’), revealing opportunities for (i) land-use densification within catchment areas or (ii) increased network connectivity of the stations supporting the 24 hour London economy.

[Maja Jovic]
For this talk, Maja is looking at the concept of ‘urban’ in architecture and national identity, and its relation to tourism in post-conflict countries. Today, these countries are transitional economies that brand themselves as touristic destinations in order to find a unique position on the world map. Maja is questioning the role of architecture in shaping the destination identity – in particular the dialogue between urban and rural. Political and cultural transformations have a spatial dimension and Maja tries to understand the way national identities are reshaped, reproduced and differentiated from one another through architectural analysis. The findings are illustrated with the post-conflict regions of South East Europe, their creation of national stories on one side and Europeanism on the other. The dialogue between modernisation and the traditional resulted in a change of represented destination identity and a shift of attitude towards traditional and modern age architecture.

Andrew Smith is a Reader in Tourism and Events and co-leads the Tourism and Events Research Group. His research focuses on city events and urban tourism and he works in and between the fields of urban studies and tourism/event studies. His work has been published in a variety of journals including Urban Studies, ARQ, European Planning Studies and Annals of Tourism Research and he has written two books: Events and Urban Regeneration: The Strategic Use of Events to Revitalise Cities (Routledge, 2012) and Events in the City: Using Public Spaces as Event Venues (Routledge, 2016). His current work focuses on the contested use of London’s parks as venues for large scale events; and the significance of urban light festivals .

Davide Deriu is a Reader and Director of Architectural Research at the University of Westminster. He holds a PhD from UCL and was awarded grants from the AHRC, Yale University, and the Canadian Centre for Architecture (CCA), where he curated the exhibition Modernism in Miniature. His main research interests lie at the intersection between spatial and visual cultures, and he has published on a wide range of subjects – from underground space to aerial photography. Recently, Davide was a Mellon Fellow on the CCA research program Architecture and/for Photography, and Rowe Lecturer at RIBA. He leads the interdisciplinary project Vertigo in the City, which received seed funding from the Wellcome Trust.

Enrica Papa is a Senior Lecturer at the Department of Planning and Transport of the University of Westminster, joined the ETC Board in November 2017. She is the Course leader of the MSc in Transport Planning and Management and leads the transport group of the AESOP (European Association of Schools of Planning). Enrica’s research is positioned at the intersection of urban, transport and economic geography. She has published extensively on geography of mobility, planning for sustainable accessibility, transitions to low-carbon and low-energy living and societies. Within the AET Board, she will be responsible for the AET Marketing and Recruitment activities and will coordinate the AET Ambassadors network.

Maja Jovic’s interests in the city, nation and destination branding, and in image management and national identity, lead her to question how it shapes the built environment and is shaped by a conflict and its residue. She focuses on the power of brand management, how fluctuations in national stories reflect on the built environment and the intersection of tourism and architecture in creating a destination brand. Her doctoral thesis, ‘Branding Post-Conflict Cities and Nations’ explored how branding helps recreate an image of a post-conflict city or nation. Maja took an interdisciplinary approach to identify the relations between the effect of national image and nationalism to brands, power, the built environment and the image as a destination. Maja teaches across departments to undergraduate and postgraduate students – Tourism, Architecture, Architectural Technology, Planning, and Property and Construction.

Victoria Watson is a Senior Lecturer in Architecture at the University of Westminster, a partner in Doctor Watson Architects (DWA) and a visiting tutor to the MA Architecture degree at the Royal College of Art. She has contributed articles about Mies van der Rohe to the Journal of Architecture and to the Transactions of the Ancient Monuments Society. She has written about colour theory for a variety of journals and magazines. In 2010 she won a Rome scholarship and in 2012 her book, Utopian Adventure: the Corviale Void was published. Her architectonic models, derived from the study of colour in Miesian architecture, have been exhibited at the Royal Academy in London. She is currently writing a book about the cultural economics of architecture.

LATE Conversations is a series of events exploring the interactions between Landscape, Architecture and Tourism. It aims to engage an interdisciplinary conversation across the departments of the Faculty of Architecture and the Built Environment and foster dialogue between academics,/professionals and students from different disciplines engaged with the Landscape.