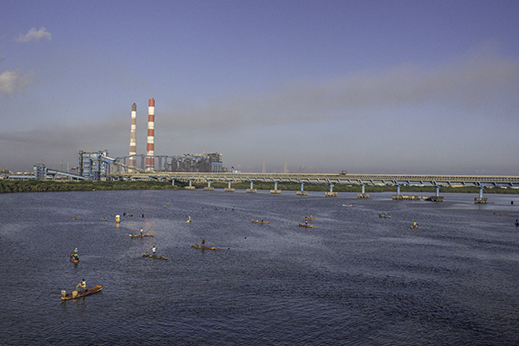 Lindsay Bremner and an interdisciplinary and intersectoral team of researchers from India, the UK and Canada have been awarded a British Council Knowledge Frontiers: International interdisciplinary Research 2022 grant for a two-year project titled ‘Reimagining the Good City from Ennore Creek, Chennai.’

Ennore Creek is a coastal wetland and backwater of the Kosasthalaiyar River in north Chennai, Tamil Nadu, India. Rich with mangroves, salt flats, canals and the myriad life-forms that thrive in them, it is home to numerous fishing communities and serves as a buffer against floods and sea level rise. After the 1950s, when Chennai began associating the idea of the ‘Good City’ with industrialisation and modernisation, Ennore was rezoned for heavy polluting industries. Land-use changes and lax environmental controls resulted in pollution, coal ash leakage and dumping of toxic material into the creek, degrading its ecosystem and impacting the health and livelihoods of its communities. This project will bring together diverse communities of knowledge and practice to reimagine and rearticulate the future of the creek in the interests of local communities, in the context of permanent weather extremes, climate challenges and a state-led creek eco-restoration proposal.