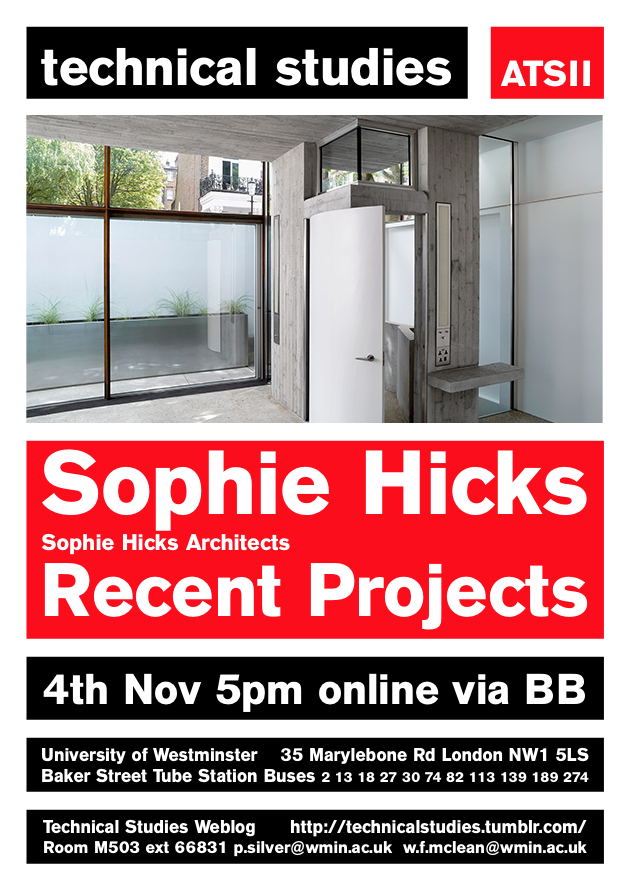 When: Wednesday, 4th of November at 5pm

Sophie Hicks established Sophie Hicks Architects in 1990 whilst still a student at the Architectural Association and she became a chartered architect in 1994. Prior to her career as an architect she worked in fashion: as a stylist for Vogue Magazine; and for the designer, Azzedine Alaia. She leads a practice with a focus on both fashion retail and private residential design. Her retail projects include Westbourne House with Paul Smith, his “shop in a house”; and the development of a store concept for Chloé, with signature plywood walls, which has been used in over one hundred stores worldwide. Sophie has also worked closely with Yohji Yamamoto to design his flagship store in Paris; and she created a new-build flagship store for Acne Studios in Seoul.

In parallel with her retail designs, Sophie Hicks acquired three sites in London, all in conservation areas, with the intention of building a contemporary house on each. The first, a small house in Regent Square, was completed in 2014. The second, a street-facing house in Earl’s Court Square, was completed in 2018. The third, a larger house in Holland Park, has obtained planning permission. New-build, contemporary houses are relatively rare in central London, because of the strong culture in the UK of preservation of the historic environment. Sophie has designed these new houses to “…respect the past, and respond to it, while at the same time expressing the spirit of our own times.” Sophie Hicks is a member of the Panel for Creative and Design at the Institute for Apprenticeships (IFA). The aim of the IFA is to improve the work opportunities and job satisfaction of young people, avoid student debt, and address the skills shortage in the UK.