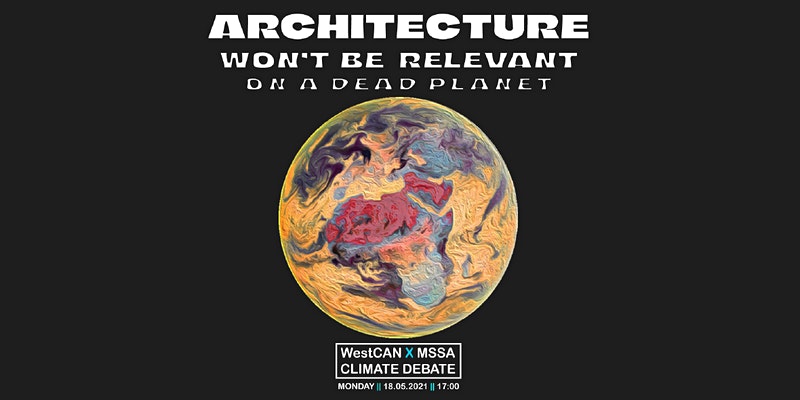 Since the beginning of civilization, the human race has used architecture as a form of protection from the changing climate, sometimes referred to as the Third Skin. However, significant global climate change has brought to light the impact humanity has had on the planet due to the mass extraction of fossil fuels and other unsustainable practices. The challenge we face is not only important for humanity, but the Earth as a whole. How can architecture play a role in the survival of the planet?

The format is a panel discussion guided by a chair between two students, two tutors, and two professionals, each invited by the two universities. Each speaker will present for 3-4 minutes, after which a general discussion will follow facilitated by the chair. At this point, members of the audience are invited to ask questions in the live chat aimed at certain speakers or both panels as a whole. The questions will be selected by the chair, so that the conversation opens up into new areas, thus expanding everyone’s learning on this pertinent yet broad topic.

TECHNOLOGICAL – Technology in Architecture has fundamentally shaped society, the economy and the environment. Throughout time, the rapid and continuous urbanization of the modern world has put pressure on cities to provide satisfactory living conditions for humans at the cost of the environment. Even though technology itself has caused many environmental and social problems, it could be key to addressing some of the pressing global challenges we face as a society, through helping to reduce the negative impact of the built environment on the Earth. However, the new employed technologies are facing differing opinions in regards to which solutions have greater benefits on the environment:

ECOLOGICAL – For generations humans have presented themselves as dominant over nature, exploiting and viewing it as subordinate without considering the severe repercussions on the environment. Directly relating to architecture, construction sites for instance have gradually destroyed the habitats of species which are crucial to our survival on the planet leaving them shelter-less.

SOCIAL – Through the work of social scientists and other like-minded people, the impact of the Anthropocene is being acknowledged as more than just climate science. Awareness of environmental injustice has led to the development of terms such as “the unequal exchange”, the material extraction and labour exploitation of communities for the benefit of others. In addition, these areas in the Global South will be impacted by the effects of climate change sooner. This injustice is not just between nations, but within societies, as the global top 10% are responsible for half of all global emissions (Oxfam, 2020).