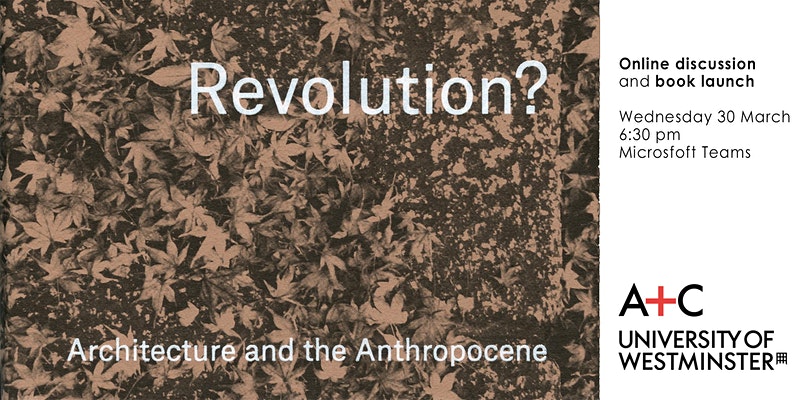 The University of Westminster and Lund Humphries are delighted to celebrate the launch of Revolution? Architecture and the Anthropocene, a new book that asks why architecture has lagged behind the environmental curve for the last fifty years.

The online event will take place online on Microsoft Teams, and attendees will automatically receive a joining link upon completion of Eventbrite Registration.

Lindsay Bremner (Chair) is Director of Research at the School of Architecture and Cities, University of Westminster, and was Principal Investigator of Monsoon Assemblages, a European Research Council-funded project to investigate the impact of changing monsoon climates on four Asian cities. Previously, she was Professor and Chair of Architecture, Tyler School of Art at Temple University, Philadelphia (2006-11), and Chair of Architecture, University of the Witwatersrand in Johannesburg (1998-2004). Her most recent publication is Monsoon Solidarity: A Global Approach to Climate Justice (2022).

Harry Charrington is an architect and Head of the School of Architecture and Cities at the University of Westminster. He worked for Alvar Aalto & Co. in Helsinki, and later practiced in Newcastle and Bristol. He has taught at the Universities of Newcastle, UWE Bristol and Bath in the UK, and Helsinki and Aalto Universities and Vaasa Institute of Technology in Finland. His research focuses on the histories of modernism and on design practice. These include the exhibition Alvar Aalto: Process & Culture (RIBA Heinz), and his book Alvar Aalto: the Mark of the Hand, co-authored with Vezio Nava, which won the 2012 RIBA President’s Medal for Research.

Brian Ford (RIBA FRSA) is an architect, an environmental design consultant and Emeritus Professor at the University of Nottingham. He was in private practice for over 25 years, including Peake Short & Partners and Short Ford Associates, where he worked on innovative low carbon projects in Europe, USA, India, Australia and China. He initiated a series of multi-partner EU-funded research projects on natural ventilation and passive cooling and was until recently Vice President of the Passive and Low Energy Architecture organisation (PLEA). His most recent book is The Architecture of Natural Cooling (2020, 2nd edition).

Ricardo De Ostos is a director of NaJa & deOstos, a London-based studio developed as a platform for experimental architectural design, before that working for Peter Cook, Future Systems and Foster + Partners. He is a Unit Master at the Architectural Association School of Architecture, director of the AA Madrid Summer School and guest professor at Ecole Spéciale d’Architecture in Paris. Most recently, he is co-author of the book Scavengers and Other Creatures in Promised Lands (2017).